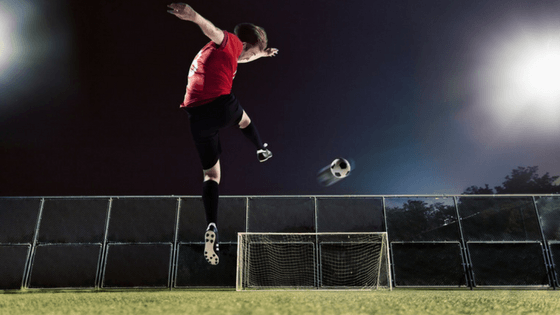 Score a worldy in your fitness business

I pick the ball up on the half way line with no one near me and any defenders are at least 20 yards away.

So I start driving forward, still. with no one near me apart from 3 defenders who are close to our 1 striker, who is the only person I can realistically pass the ball to as everyone else is behind me.

There only one thing I have in my mind as soon as I get the ball. Instantly I know exactly what I'm doing…..And everyone else can see it as well, especially my teammates…………but, they're not happy, they don't want me to to do it.

“Don't shoot” is the shout from our right mid, because he knows that's exactly what I'm about to do, even though I'm still 35 yards out from goal, but I'm not listening and as the ball leaves my foot I know exactly where it's going.

You just know these things.Top left corner just under the crossbar, over the keepers reach (because I instinctively knew he was off his line) and nestling in the goal.Moral of the story? Well there's actually 2

1. Opportunity rears its head all the time but people don't take action on it because of lack of belief. That's why most people are stuck in business imho.

Do it anyway and prove people wrong.

Everyone told men I couldn't charge £97 a month in Manchester for boot camps, but I still did it when the average price was £27 and at one point was charging £147.

Use the naysayers as your motivation to score a worldly in business.

Home of The SWAT Personal Trainer Website and Marketing System